When the men first started work on the track below us they said they would have to remove the fence that stretched from the goat gate to the main gates.  Joe had originally put the fence there as we noticed the goats had taken to launching themselves up the steep slope and were eroding the already narrow ribbon of bank.  The more they clambered, the more soil we would lose, especially since the track below was a series of deep chasms.  As you can see from this photo, there was obviously some danger that over time we would lose our access completely if this state of affairs was allowed to continue.  Having a fence there certainly made us feel a little less exposed.

We predicted that Ricardo would make a scene, and so he did when Joe next saw him – but why?!   His argument was the ‘same old, same old’ – being both unintelligible and illogical, the trick was to listen patiently.  After all, here was a man, a few years back, who had set fire to a ‘dangerous’ bush less than a metre from our metal fence, sooooo close to our plastic water pipes.  Joe doused the flames, but Ricardo returned and lit it again.  Since then, our policy’s been that it’s best to pay lip service to him, smile and nod, and carry on regardless.  After all, we do live in a vulnerable little wooden house! 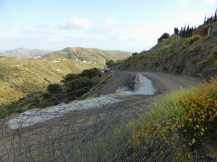 It would have been churlish not to allow the men to take down the fence, so the day they started work on 28th April, they ripped out the livestock fence. Unfortunately, the metal posts were damaged and unceremoniously dumped in a mangled heap.   The fencing was rolled up and left on the bank, where it had stayed ever since – well, until a week or so back when the roll disappeared. Here it is in the foreground.

The workmen were just finishing the shoring up of the track. Nearly time for the concreting; the last stage of its metamorphosis from humble rural path to an almost-dual-carriageway.  However, before they could get on with this, they had lots of preparation to do, such as wooden shuttering to lay to define the edges of the concrete, laying huge sheets of metal grids to strengthen the road etc. 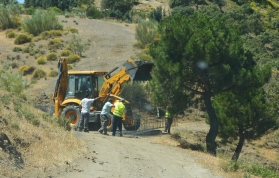 So busy were they that they weren’t really interested in that ridiculous Englishwoman again – hair flowing as she ran down the drive, eyes wild, face red with anger, mouth a blur – having another screaming rant in a sort of bastardised version of their native language.  I was met with the usual blank faces and disinterest as they denied all knowledge of taking the fencing.  I’d already had the foresight to translate something via Google Translate (the best I could do) which let them know in no uncertain terms that it was their responsibility to replace the fencing, including new fence posts.  Speak to El Jefe (the boss) they said.  I left them with the piece of paper and an ultimatum which, as a rule, I don’t like doing, but what the hell!  And anyway, who was this mysterious boss?

We scored a minor victory when Joe confirmed that they had, indeed, put the shuttering at the point where our bank used to be.  As you can see from the photo, that’s quite a lot of bank they took away in order to get the digger through!  If they hadn’t done this, then it would be tantamount to a land grab – commandeering an extra two metres and in the future being able to claim it as their own.  This, of course, would jeopardise any chance of us being able to dig deep and have big boulders lining the bank (by far the best solution), because we would be seen as trespassing on their road!

Next day, Friday, as we drove past them on the way to get some shopping, the young whipper-snapper of a digger driver told us if we went out we wouldn’t be able to get back in because they were about to start concreting.  Not only that, but we would have to stay in until Tuesday or until they’d finished our section.  But, as luck would have it, the boss man had actually put in an appearance that day and was lurking behind the digger.  What a bloody smoothie!  Of course it was all right to go out; we won’t be doing the concreting until later today, perhaps even Monday, he said.  Oh, and by the way I asked, in my best Spanish, what about the fencing?  He assured me that of course they would be replacing it but reiterated that no, they hadn’t taken it.   I didn’t believe a word he said and anyway, was I supposed to be grateful for his generosity?

That weekend we had rain and thunderstorms, culminating in an almighty hailstorm on the Sunday; quite amazing for early June. So much water, but fantastic to watch the stream follow Joe’s basic irrigation system, down the side of the wall, across the drive and under the little stone bridge to disappear off down the hill in a cascade of waterfalls.

If  ‘our’ workmen are anything to go by, it seems that the Spanish have little grasp of how water flows.  When the storm had passed, we took a look at how the camber had affected the flow of water, and the signs weren’t good.

Round the hill from John & Deryk it went, following the same well-worn path as it has done for years, along our bank, crossing our drive and off over the dirt to the side of the new wall. In addition, the water had driven a path underneath the wall and formed a ravine.  And all of this over one weekend.  What will Monday bring?  When they start concreting, will they do something clever with the camber to influence the flow of water?  Will they put a lip or gully between the end of the concrete road and our earth bank?  I won’t hold my breath!

I’d hate you to think I was a professional moaner; someone who resists change and is not happy whatever anyone does for them.  But if you have read any of the other posts on Foggiebabe, maybe you’ll get an inkling of how happy we are to be here, but equally I do feel that sometimes even gentle people can be pushed too far and it doesn’t hurt occasionally to stand up for one’s rights.

Whatever happens now, we’re both holding on to the bigger picture in all of this;  that, subject to a few modifications on both sides, our access should now be secured for ever.   Oh – and I nearly forgot – we’re also going to be given a lovely new road. Good things truly do happen in paradise.