Return of the six-pack 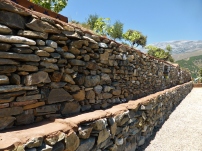 Joe completed the massive wall to the side of the cabin about a month ago, but there were some finishing touches to do until it was fully camera-ready.  It’s definitely a biggie – 21m long, a metre thick and over 2m tall but as for the hidden statistics, we can only hazard a guess.

We estimate it’s taken about 100 trips to the nearby sources to gather the rocks and hardcore, it’s gobbled up about 15-20 tons of stone and hardcore and the majority of it was completed within 6 weeks.

Joe usually went out once a day, sometimes twice and on the odd occasion he would go out three times.  But, I suppose you could say that the best news of all was that it was all free (if you don’t count wear and tear on the Nissan and fuel), using rubbish tip hardcore and materials as well as stones that the rocky sierras keep jettisoning onto the mountain tracks. Oh, and I nearly forgot, Joe is happy to see that due to all his exertions his six-pack has returned!

Never been one to overestimate his achievements, he’s usually foot-tapping, ready to move on to the next thing.  However, towards the end of this particular marathon, he would actually sit down from time to time just to gaze at the wall.  He said it felt as if someone else had built it, and he couldn’t imagine how he managed to find the energy!

As the wall progressed, our ideas organically grew.  The first alcove we thought would look very nice with Bertie the bronze boar put inside but as he’s quite big Joe couldn’t find long enough stones to form a lintel.  But, would you believe it, someone was throwing away three reinforced concrete posts which were almost exactly the length we needed to use as lintels.  I think Bertie’s quite happy in there; he got a bit tired of patrolling the land, out in all weathers.

Next came the alcove for the carved wooden head.  There was a suggestion that we should put a deity in there, like a statue of the Buddha, but I’d prefer to worship something a little more ordinary or grotesque; depends how you look at it!  It was quite nice to make a gentle curve above the midpoint of the wall.  Then there was a smaller hole to accommodate a nicely shaped stone for the lintel and a smaller alcove which we lined with terracotta tiles (now painted), in which we’ve showcased a feature stone with a hole in it.

At the far end, on the right hand side, the wall ended in a straight, vertical line Unfortunately, the roots of our late-lamented New Zealand Christmas Tree (supposed to be hardy in extreme weather, but failed the Foggie test) were more tenacious that Joe’d thought, so while extracting them the end part of the dry stone wall collapsed.  A more sturdy ending was constructed using a bit of mortar.  Our lovely neighbour Horst is in the background lending a hand with the concreting.

We decided to make a bit of a feature of this, which coincided with Horst giving us some junk building materials and a huge whopper of an agave which, as it grows, will have its lower leaves chopped off to more resemble a tree. In keeping with most things around us here, anything concrete is quickly covered with matt brown paint.

I did a simple Moorish type design on some plastic and cut out as a stencil, but the paint bled so we roughed out the design and painted it freehand – not the kind of job I would like to do very often. It was around 33 deg, it was an awkward angle, my ‘fine’ paintbrush got reduced to a few unmanageable tufts, ants were crawling all over me, and the paint was congealing.  However, it seems to work, doesn’t it?

2 Responses to Return of the six-pack