Sumer is icumen in 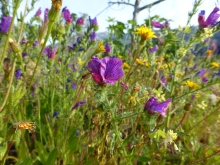 “In joy or sadness flowers are our constant friends.” Okakura Kakuzo, The Book of Tea

This is part of our wildflower meadow; can you believe such beauty exists?!  I’ve taken hundreds of photos of flowers and grasses this year, but I’m still a long way off identifying even a quarter of them.  And now because the temperature has been in the high 80’s for over a week now, with no prospect of it abating, the land is beginning to turn sepia. Luckily all the photos are safely filed away so I can study them at my leisure.

I’m so glad that Joe was able to do the balls-breaking job (with a blunt saw) of carefully cutting and laying fillets of wood just below the eaves on each side of the cabin, and then sealing them with expensive tubes of flexible goo.  The reason?  To put a stop to the scout bees once more identifying our des res as a suitable new home for their queen.  It’s done the trick (so far).

Bees love wood, especially with cracks and holes – and we certainly still have some those – but much less now!  When the nice pest control people came out last year to deal with my ‘little problem’ (a small matter of thousands of bees), they also sprayed some sort of deterrent around the eaves area that would last three years.  But we couldn’t leave it to chance.

Joe found a rash of these curious structures concentrated along the edge of one of our paths. Moulded out of earth, they’re all pretty much a standard size – about 1″ high, and look like miniature chimneys.  Obviously lovingly hand-crafted by a little creature, but what and for what purpose?  We keep trying to catch it/them in the act, but no joy so far.

I spied this handsome chap lurking in our drainage pipe.  He was bright green, a male sand lizard perhaps, and all of a foot long.  I was pleasantly surprised to get him on film as he was like greased lightning when I ventured closer. I’m not having much luck with snapping butterflies either; I’ve managed this one so far this year.

I watched a chap toil away all day on the ridge opposite – well, until 2.30pm when everything stops for the Spanish lunch-break. With a ‘high-ho Silver’, he jumped on his gallant steed for the long, precipitous trek back to our neighbouring village, past the corner of our land, with pack mula (mule) in tow.

When I tell anyone that we live north of the Costa del Sol, I’m acutely aware it could conjure up images of cranes, concrete, empty flats, traffic and hordes of people. Because of this I often foolishly find myself compelled to say something like, “where we live is so rural that they still go to work on a donkey”.  But sadly all the modernisation (‘re-forming’, they euphemistically call it) that is going on elsewhere is now beginning to reach the traditional Moorish whitewashed mountain aldeas (villages) around us.  At the moment, however, there are still these houses to be found containing a stable at ground floor level and that is presumably where these beasts were headed for.

El Jefe, our ancient olive tree, seems to have adorned itself with thousands of yellowy white, rather insignificant flowers this year. He was procured for us in 2010, and had to go through the indignity of a very long journey on the back of a lorry and rather unceremoniously being winched into place, so maybe he’s been sulking?  Last year there were a few flowers but not one olive, so we’ve got our fingers crossed that, having made us wait for five years, we will finally be rewarded with some fruit.  And if we do, we’ll have to rename him with the female version of ‘The Boss’, whatever that is.